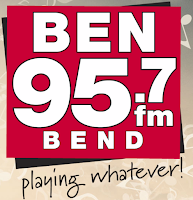 Horizon Broadcasting Group says it has amended the format of KLTW 95.7 FM to Adult Hits branding as 95.7 BEN FM… Playing Whatever!

“We’re excited to create a radio station for Central Oregon that is focused on playing whatever Ben wants,” said Horizon Broadcasting Group Market Manager Jess Hanson. “The station is targeted to adults who like a variety of music genres, and we plan to focus on playing hit records that appeal to men 25-54, and deliver an audience of prime consumers for our advertisers.”

95.7 BEN FM is the new home of the 12’s in Central Oregon, and will broadcast all Seattle Seahawks games live.

“95.7 MY FM will remain actively involved in the community, promoting events like Alive After 5 and a variety of non-profit events with whom Horizon Broadcasting Group has partnered,” noted Hanson.
Posted 3:38:00 AM