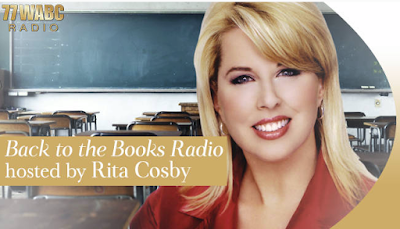 Cumulus Media has announced that New York City Talk WABC 770 AM debuted its exclusive web series, “Back to the Books Radio with Rita Cosby” Tuesday on wabcradio.com.

As most Tri-State area students head back to the classroom this week, WABC Radio Political Editor and award-winning journalist Rita Cosby talks with some of the most important voices in New York City and U.S. education about the condition of our education system and the issues that are affecting our children this school year. Cosby and her guests put everything on the table in this series, including: charter schools, teachers unions, inner city education, and student safety within our schools.

Craig Schwalb, WABC Radio Program Director said,  “As this historic election nears, Rita Cosby speaks to the most intriguing people in education and politics about the state of our education system, both regionally and nationally.”

“Back to the Books Radio with Rita Cosby” debuts exclusively on wabcradio.com with new segments debuting as noted below and replaying daily through Monday, September 12, 2016.

A rare interview with the former U.S. Presidential candidate, known as "The Education Governor" for his groundbreaking educational work as Governor of Florida and promoting education in the 2016 Presidential Race. In this no-holds-barred interview with Cosby, Bush talks about standardized testing, charter schools, and school vouchers, and says the teachers unions are devastating our educational system and hurting kids.

Duncan talks about the inequities in education, inner city programs, and gun control.

2b) Wednesday, September 7, 2016: Janet Napolitano, President of the University of California System and Former U.S. Secretary of Homeland Security

Farina talks about the success of Pre-K and the proposed ban of suspending kids K-2.

Mulgrew discusses the teacher shortage across America due to teachers being demoralized for two decades and how he felt teachers were treated poorly by previous NYC mayor, but feels this one is appreciating teachers. Mulgrew also talks about teachers’ opposition to a proposed ban of suspending kids grades K-2.

Dr. McNiff talks with Cosby about their amazing success record where 98 percent of their high school seniors graduate, and most come from low income homes.
Posted 3:10:00 AM