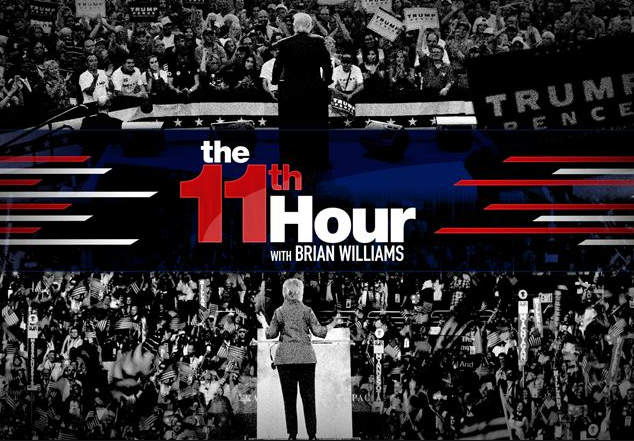 Brian Williams, the veteran anchorman who was suspended from NBC in 2015 for making false statements on the air, is returning to a regular nightly newscast on Tuesday.

Williams left the network for six months without pay last year, then quietly resurfaced on sister channel MSNBC to deliver political coverage once the presidential campaign got rolling, often paired with Rachel Maddow. Penance done, he now assumes a much larger role. “The 11th Hour with Brian Williams” debuts at 11 p.m. EDT, featuring the anchor in a live half-hour recap of the day’s major political stories and election coverage.

“We want a broadcast that will feel like a continuation of the conversation we’ve had all during this unprecedented campaign season,” says Mr. Williams. “As the general election ramps up, there’s an opportunity to assess and discuss the campaign at the end of each day. With the help of the very best team in the business, we hope to offer some closure and sanity.”

The Washington Times reports ot is a pivotal time for MSNBC, which has pushed its way into second place in the great ratings war between cable news channels. Fox News remains number one across all viewers day and night, a position the network has held for 14 years. The audience typically tops 2 million people. MSNBC averages 1.1 million, CNN 844,000, according to the current Nielsen numbers.
Posted 4:12:00 AM