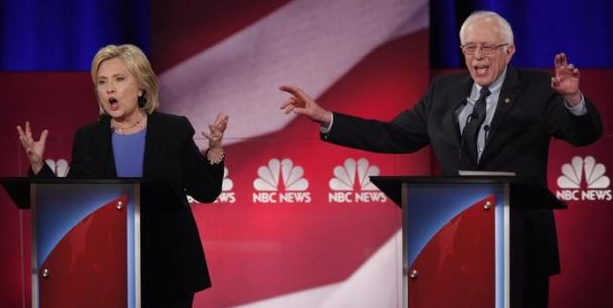 UPDATE 2/5/16 11:30AM: The Thursday evening DemDebate was the lowest-rated debate of the 2016 election cycle by far, according to preliminary Nielsen data. The debate had a 3.3 household rating in Nielsen's metered markets.  The prior low was a 6.0 household rating for ABC's Democratic debate on the Saturday night before Christmas.

(Reuters) -- Democrat Hillary Clinton went on the attack against rival Bernie Sanders on Thursday in their most contentious presidential debate yet, questioning whether his ambitious proposals were viable and accusing him of an "artful smear" in suggesting she could be bought by political donations.

Sanders fought back repeatedly, questioning Clinton's progressive credentials and portraying her as a creature of the political establishment in a debate that featured heated exchanges on healthcare, college tuition funding and efforts to rein in Wall Street.


This is starting to feel like mom and dad are openly fighting in the middle of Applebee's... #DemDebate
— Andrew Kavney (@Cave_Knee423) February 5, 2016


The intensity reflected a race that has seen Clinton's once prohibitive lead in polls shrivel against Sanders as the two vie for the Democratic nomination for the Nov. 8 election.

One of Clinton's most forceful remarks came in response to a suggestion by Sanders that she could be influenced by political donations by Wall Street.

"Enough is enough. If you've got something to say, say it directly," she said. "But you will not find that I ever changed a view or a vote because of any donation that I ever received.

"So I think it's time to end the very artful smear that you and your campaign have been carrying out," she said.

Clinton charged that Sanders' proposal for single-payer universal healthcare coverage would jeopardize Obamacare, calling it "a great mistake," and said his plans for free college education would be too costly to be realistic.

"I can get things done. I'm not making promises I can't keep," Clinton said.

Sanders said he would not dismantle Obamacare but would expand it, pointing to the many other countries that provide universal healthcare.

"I do not accept the belief that the United States of America can’t do that," Sanders said. "By moving forward, rallying the American people, I do believe we should have healthcare for all."

Sanders said his proposal for free tuition at public universities would be paid with a tax on Wall Street speculation. "The middle class bailed out Wall Street in their time of need. Now, it is Wall Street's time to help the middle class," he said.

Five days before New Hampshire holds the second of the state-by-state presidential nominating contests, opinion polls show Sanders, a U.S. senator from neighboring Vermont, with a double-digit lead over Clinton after surprising the front-runner by finishing just barely behind her in Iowa on Monday.

Clinton seemed energized by her underdog status in New Hampshire, delivering her most aggressive debate performance of the campaign. It was reminiscent of her 2008 run against Barack Obama, when she also began as the front-runner but became a sharper and less cautious candidate as she began to lose.

The debate was the first since former Maryland Governor Martin O'Malley dropped out on Monday after a poor finish in Iowa, giving the two candidates more freedom to directly engage each other.


It's hard to be a real progressive and take on the establishment when you've become dependent on Wall St. and drug company money. #DemDebate
— Bernie Sanders (@BernieSanders) February 5, 2016

The two battled over who best represented progressive ideals. Sanders said he would lead a "political revolution," but Clinton questioned his ability to get his proposals through a Republican-led Congress.

"A progressive is someone who makes progress," she said.

And she attacked Sanders' own credentials as a progressive, bringing up his votes against the 1993 Brady bill that mandated federal background checks on gun purchases and his 2005 vote for a bill to protect gun manufacturers and dealers from lawsuits.

Sanders repeated his earlier pledge not to attack Clinton on the controversy over her use of a private email account and a private server for government business when she was secretary of state.

"I will not politicize it," he said.


But Sanders renewed his attacks on Clinton for her Senate vote to authorize the U.S. invasion of Iraq, which she has since called a mistake. He pointed out he voted against the war, which he said had led to the rise of the Islamic State militant group.

"Look we did differ," Clinton responded. "A vote in 2002 is not a plan to defeat ISIS. "We have to look at the threats that we face right now."

Clinton has tried to play down expectations for her performance in New Hampshire, where she came from behind for an upset victory in the 2008 campaign just days after losing badly to Obama in Iowa.

The surprisingly strong performance by Sanders in Iowa is likely to prolong a race that Clinton entered as the presumptive front-runner.

In addition to previously scheduled debates in Wisconsin and Florida, the candidates added one in March in Flint, Michigan, to draw attention to the city's contaminated water crisis ahead of the Michigan primary. They also will debate in April and May.