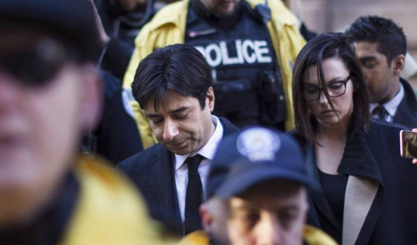 As the high-profile trial of Jian Ghomeshi opened Monday, a woman who alleges she was sexually assaulted twice by the former CBC radio host testified that he twice pulled her hair and on one occasion punched her in the head multiple times after they started kissing at his home.

"He pulls my head down, and at the same time, he's punching me in the head, multiple times," the woman, whose identity is protected by a publication ban, said in Ontario Court in Toronto.

"I'm terrified. I don't know why he's doing this, I don't know if he's going to stop. Can I take this pain? And my ears are ringing, and I felt like I was going to faint. I'm going to end up passed out on his floor. And I start to cry."

The CBC reports the credibility of the woman's testimony was later challenged aggressively by Ghomeshi's lawyer, Marie Henein, who called into question her recollection of key events.

Ghomeshi, 48, who lives in Toronto, has pleaded not guilty in court to four counts of sexual assault and one count of overcoming resistance by choking, all related to assaults alleged to have taken place from 2002 to 2003. The trial is by judge only and is being heard by Judge William Horkins.

Wearing a charcoal suit, Ghomeshi sat silent in the courtroom, occasionally scribbling down notes during the trial.

The woman said the two had met at a Christmas party in 2002 and that they had been flirting with one another. She described Ghomeshi, the former host CBC Radio's Q, who at the time was hosting the CBC show Play, as "charming, fun, happy, charismatic."

She said he later invited her to a taping of his show, which she said she attended two days later. After the taping, she said they went to a nearby pub, then he drove her to her car at a nearby parking lot.

When they got to the parking lot, they began kissing in his car, she said. Suddenly and unexpectedly she said Ghomeshi grabbed her hair "very hard."

She said that it was an instant switch and that Ghomeshi suddenly reverted "to the nice guy and I questioned whether he actually meant to hurt me."

"I was thinking, 'Perhaps he doesn't know his own strength. Or ... in the future, this is something we'll have to sort out."