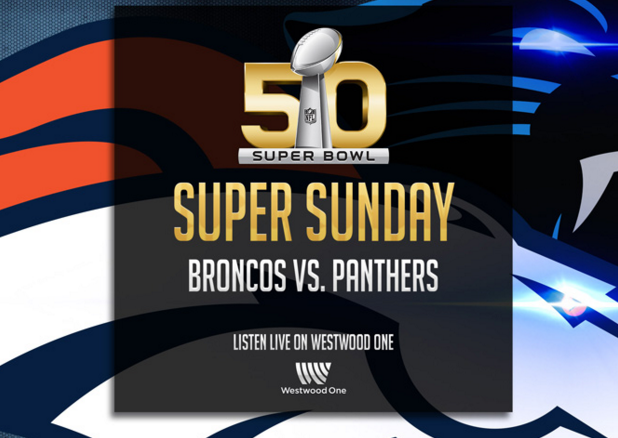 For the 29th consecutive year and the 43rd time overall, Westwood One Sports, the official network radio partner for the National Football League, presents comprehensive coverage of historic Super Bowl 50.

The network will feature a full schedule of Game Day programming leading up to kickoff, live from Levi’s Stadium in Santa Clara, California, on Sunday, February 7, 2016. Future Hall of Famer Peyton Manning and the Denver Broncos take on Cam Newton and the Carolina Panthers.

Beginning at 5:00 pm ET, Kevin Harlan, Boomer Esiason, and Hall of Famer Dan Fouts will call the action to millions of listeners across multiple platforms. This is Esiason’s 16th straight Super Bowl broadcast with Westwood One and Harlan’s sixth, while Fouts is making his Super Bowl debut.

Former QB Boomer Esiason will play two positions on Super Sunday: pregame/halftime/postgame analyst for CBS Sports television and game analyst for Westwood One radio. Immediately following CBS Sports’ Super Bowl Today pregame show broadcast on the field, Esiason will make his way up to the Westwood One booth to join the radio broadcast, then rejoin TV for both their halftime and postgame segments. This is the fifth time that Esiason will pull double-duty for the Super Bowl, having done so previously in Super Bowls XXXVIII, XLI, XLIV, and XLVII.

In addition to the Super Bowl 50 game broadcast, Westwood One presents a full slate of pregame programming, beginning at 2:00 pm ET on Game Day:

Westwood One will also produce “Seven Days to Sunday—The Road to Super Bowl 50.”  This hour-long preview show will air each night during the week leading up to Game Day.  Hosted by Scott Graham, the voice of NFL Films, the nightly program will feature interviews with players from both teams participating in Super Bowl 50, as well as coaches and other special guests. Each night’s show will be co-hosted by a different Westwood One NFL analyst and will also feature a flashback to previous Super Bowls as we celebrate the 50th anniversary of America’s biggest sporting event.

Super Bowl 50 will be heard on American Forces Radio Network, which provides programming to America’s military forces around the globe.

Fans can find out where to hear Westwood One’s Super Bowl 50 game broadcast and pregame shows at www.westwoodonesports.com.  The website will feature a nationwide station finder, plus exclusive interviews, analysis, and photos from the broadcast crew throughout the week from California.
Posted 3:06:00 AM