Since the rise of the Internet, print media — most notably newspapers — have faced a big problem with younger readers. But according to a new study released today by the Pew Research Center and The Economist Group, when you look specifically at the devices they love — the smartphones in their pockets — young adults rival or even surpass their parents and grandparents as news consumers, writes Justin Ellis at Nieman Journalism Lab. 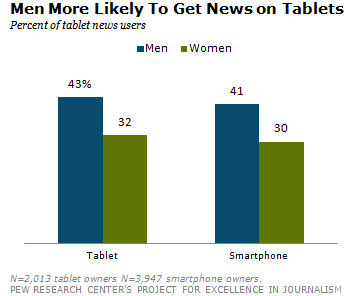 According to the report from Pew’s Project in Excellence inJournalism, 37 percent of smartphone owners between the ages of 18 and 29 get news on their devices daily, along with 40 percent of smartphone owners aged 30 to 49. Those are slightly higher than the equivalent rates for 50-64 (31 percent) and 65-plus (25 percent). Among tablet owners, news consumption numbers were broadly similar across age groups, with 50- to 64-year-olds being the peak news consumers.

There’s more good news for media companies hoping to reach younger readers: They are more likely to share the news they read on mobile devices and to engage with ads on smartphones and tablets. For ads in particular, readers 18-29 were twice as likely to “at least sometimes” touch an ad on a tablet than people 30-49.

Use of mobile devices has been on the rise for some time, as has growing use of phones and tablets as the main method of going online. Pew’s new findings again reinforce the importance of mobile to the future of journalism, but it also points to new opportunities for media companies.

The data comes from a survey of 9,513 adults, 4,638 of whom owned a mobile device, between June and August of this year.