Legendary morning star Don Wade, the 30-year veteran of radio who has been battling brain cancer for the past three months, won’t be returning to WLS-AM (890). 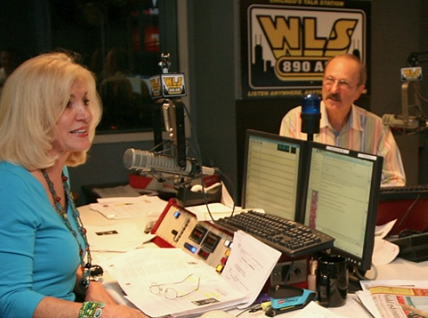 Wade, 71, and his wife and radio partner, Roma Wade, who’ve been off the air since early September, announced Thursday that they’re stepping down from the Cumulus Media news/talk station to focus on his health and medical treatment. Their contract expires at the end of the year.

Bruce and Dan began substituting on the "Don Wade and Roma" show three months ago when Don started on going treatment for a brain tumor. Don and Roma issued the following statement about Bruce and Dan permanently continuing in their former timeslot:

"We are pleased to pass the Morning Show gauntlet to two of our favorite WLS hosts: Dan Proft who was a regular feature on our show ("Pundit" and "Fundit") long before he ran for Governor, and crazy Bruce Wolf who brings the perfect balance to start your day on WLS. We like to think we hand-picked our great replacements. They are terrific!

"In 1985 the Bears won the Superbowl and we did our first Don Wade and Roma show on WLS. That's 27 years ago. To us, it's been like winning the Superbowl everyday!

In September, doctors discovered a growth on Don Wade’s brain after he suffered a seizure in . The couple was there to attend the wedding of their daughter, Heather. Back in , neurosurgeons removed the growth that turned out to be malignant. In October, he began a six-week course of chemotherapy and radiation treatments.

"Daily brain storms were Don's M-O. Then suddenly, a real brain storm comes along. Even with successful surgery, recovery is long. Attitude is key. Your encouraging, loving cards, letters and emails helped us maintain what Don's doctors describe as 'the most positive optimistic attitude in the universe! Thank you for every single prayer and good wish.

"The daily stress of rising each day at midnight to prep for our 5a show does not help the healing process. So we are choosing a different path and focusing on what's really important for us right now."

"Don and Roma are and 27 years waking up is an amazing feat. The focus and strength it takes to do live radio every day on one of the world's biggest stages will serve Don well as he continues to heal. We wish Don and Roma the best and will always keep a mic open for them."

Bob Feder at timeoutchicago.com reports Donna Baker, vice president and market manager of Cumulus Media in Chicago, called the Wades “among the most genuine and caring people on the planet,” adding: “They are an inspiration as a couple, and will always be a part of the WLS family.”