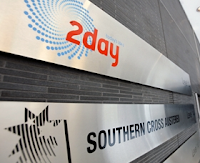 Besieged radio station 2Day FM could be forced to break its silence over the royal prank call, with the media watchdog confirming it will investigate the scandal.

According to theage.com.au, the station could lose its right to broadcast if it is found by the Australian Communications and Media Authority (ACMA) to have breached a licence condition. It may also be subject to tighter restrictions and a hefty fine.

Parent company Southern Cross Austereo could be compelled to name the employees who approved the prank – something it has refused to do so far.

On Wednesday night, Austereo denied that Bargwanna or in-house lawyer Tania Petsinis approved the broadcast of the prank call.

An ACMA spokesman said the watchdog would investigate whether 2Day FM breached its license conditions or the industry's code of practice.

It will examine whether the station breached standards of decency, invaded privacy or broke rules of consent.

Jacintha Saldanha, the nurse who took the initial call, was found dead three days after she was duped by the prank. Last night, a 2Day FM spokeswoman said an internal investigation found that "all procedures and protocols were adhered to", though it has not released details of this investigation.

Southern Cross CEO Rhys Holleran claimed the station tried "at least five times" to get approval from the hospital.

The hospital denies being contacted by 2Day FM and the station has not released phone records to prove the calls were made.