“It was my decision. It wasn’t an easy one to make, but it’s the right decision for me,” 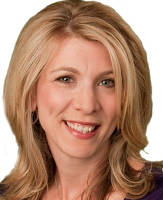 For a decade, Simms has been part of the team at “Charlotte’s Morning News” on WBT-AM (1110). Her alarm has been set for 3 a.m. all those years.

It worked well when her children were young. But her daughter is now 11 and her son is 7.

“As they’re getting older, it’s not working out. I can’t ask my middle-schooler to go to bed at 7:30 at night. Believe me, I’ve tried,” she tells Mark Washburn at charlotteobserver.com. Her husband, Slade Goldstein, is a partner in Rotelli restaurant.

Simms, 41, came to Charlotte in 1997 as an anchor and health reporter at WBTV (Channel 3) from upstate New York.

She began doing medical reports for WBT while at Channel 3 and would fill in on the morning news with Al Gardner. She had fun, and when invited to do it full-time in 2002, she jumped at it.


Simms is well-known for her advocacy on diabetes awareness. Her 7-year-old son, Benny, was diagnosed with Type 1 diabetes five years ago. She wrote a cookbook, "I Can't Cook, But I Know Someone Who Can," with chefs from the area that raised more than $12,000 for the Juvenile Diabetes Research Foundation and has served on its board.

Simms has seen a lot of changes at WBT in her decade there. Owned for decades by Jefferson Pilot and Lincoln Financial, it was sold in 2007 for $100 million at a top-of-the-market price to Greater Media, a Massachusetts-based broadcaster, along with sister station WLNK-FM (107.9).

“There’s a more corporate feel to the station, but that’s the way of the whole industry,” says Simms. “That’s what you have to do to survive.”

She’ll be signing off Dec. 14, then shutting off the alarm. She doesn’t know what her next act will be, but she wants to see what appeals.