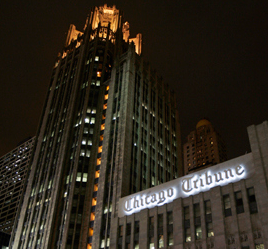 Tribune Co., the bankrupt owner of the Chicago Tribune, Los Angeles Times and six other daily newspapers, is interviewing bankers about selling its papers, according to a Bloomberg report which sources two people with knowledge of the matter.

Tribune Co. is seeking an adviser for a possible sale after the company exits bankruptcy, which is slated to happen by Dec. 31. Rupert Murdoch, chairman and chief executive officer of News Corp., plans to take a close look at Tribune Co.’s newspaper assets once they’re available, according to a person with direct knowledge of his thinking.

Selling some of Tribune Co.’s papers would bring an influx of cash to the company after four years of bankruptcy.

U.S. Bankruptcy Judge Kevin Carey accepted Tribune’s proposal to divide ownership of the newspaper and television company among its lenders in July.

Murdoch has expressed interest internally at looking at some of Tribune’s bigger-market newspapers, according to one of the people. News Corp. is splitting into two companies, with one focused on entertainment and the other on newspapers and publishing. The new publishing company, which will start off with a debt-free balance sheet, may give Murdoch more latitude to pursue newspaper acquisitions, the person said.

Tribune Co. owns eight daily newspapers, 23 television stations and WGN-AM along with stakes in more than 50 websites, including CareerBuilder.com.