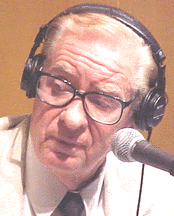 Conservative talk radio host Ray Briem, a pioneer in the Los Angeles overnight market, has passed away at age 82, his daughter announced on Wednesday.

In a testament to his influence on talk radio, Michael Reagan — Ronald Reagan’s elder son and the former host of a nationally syndicated radio talk show — told Newsmax: “Before Rush, before Hannity, and certainly before me and other conservatives, there was the voice of Ray Briem.”

He was mentored early in his career by firebrand conservative talk show host Joe Pyne, and at the time of his retirement commanded 15.7 percent of local radio listeners, according to Mediabistro.

“Few people know that Ronald Reagan’s first interview when he decided to run for governor of California was with Ray Briem,” Christopher Ruddy, CEO of Newsmax Media and a long-time friend of Briem’s, said.

Ruddy noted that Briem, using his media perch, “was a prime mover of the Reagan revolution” – and was listened to by a devoted audience that included people like Reagan, his wife Nancy, Richard Nixon, Frank Sinatra, and many other influential Californians.

Briem focused on political issues, but also featured interviews with his favorite performers from the big band era and the golden age of movies and television.