Laura's Back And Courtside Got Her 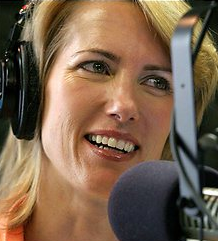 One of the most popular radio hosts in the United States, Ingraham returns to radio coast-to-coast, while significantly increasing her audience through Launchpad Digital Media, a division of Norm Pattiz's Courtside Entertainment Group. Launchpad will digitally stream the live three-hour program online, make it available as an on-demand podcast, and feature new original content from Ingraham's Dream in My Head Productions. The Laura Ingraham Show will be produced by Dream In My Head Productions with ad representation managed by Courtside.

"I suppose this means putting aside my xylophone and modern dance ambitions," Ingraham quipped.

"I'm thrilled to partner with Norm Pattiz, who helped guide my show after its initial launch in 2001; I am humbled by the outpouring of affection from my listeners over the past few weeks.  Courtside's commitment to our team, our audience, and stations will broaden the national reach of the Laura Ingraham Show to new radio markets.

"I look forward to resuming the conversation with the greatest audience in radio and those who have never listened before--making news, creating laughs, and talking about the things that really matter. People need more laughter and fewer lectures; more fresh insights and fewer stale talking points.  Each day the Laura Ingraham Show will drive the national conversation with humor and inspiration for a nation that sorely needs it."

"The wait is over. The most-listened-to woman in political talk is returning to the national airwaves and is making a major move into the on-demand digital space," said Norm Pattiz.
Posted 11:29:00 AM