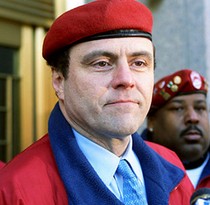 Radio talker, Guardian Angels founder and Gotti family nemesis Curtis Sliwa was once the victim of a drive-by shooting. Now he hopes to have drive-through prostate cancer surgery.

According to a story by David Hinckley at nydailynews.com, Sliwa announced Thursday morning on his show over WNYM (970 AM) that he has prostate cancer. He also said that he hopes to be back on the air Monday.

"That's my aim," Sliwa said in an interview after the show. "I don't know if I can, but I want to. I'm a fast healer. I was on the air a week after I got shot."

Sliwa famously got plugged in 1992 — on the orders of John Gotti, according to court testimony, because the Gotti family was tired of his anti-Mob campaigning on the radio.

Sliwa has since continued that campaign, and he joked yesterday that the Gotti family "must have been sticking pins in a voodoo doll" for him to get cancer.

Sliwa says he plans to do his WNYM show until 8 a.m. Thursday, then report to Mount Sinai for the surgery.

He says doctors hope to remove the cancer robotically, though a surgeon will also be scrubbed in if the robot can't do all of the job.

His doctor, Dr. James Underberg of NYU, told him that's normally the point at which radioactive seeds could be implanted to inhibit any potential growth. But Sliwa couldn't tolerate that procedure because of residual problems from the shooting.

"It would basically take out what's left of my stomach," he said.

So after consulting with Dr. David Samadi of Mount Sinai, a specially in robotic and minimally invasive procedures, he he opted for homeopathic treatments prescribed by his sister, who practices holistic medicine.

"I had seen the impact of this situation on [WABC morning host Don] Imus, who had the same diagnosis a couple of years ago," says Sliwa. "So I was basically following the same path he's been following."
While Imus says holistic treatment has been effective, though, Sliwa says he hit a wall last weekend.

"I was in Morris Plains [N.J.] to speak at a Tea Party rally," he says. "And it just slammed me. I went into a restaurant, asked if I could use their facilities, and just collapsed on the floor. I could barely get up."

He went back to Underberg and Samadi, he said, "and they told me if I didn't have surgery, I was playing Russian Roulette. Sometimes it just has to come out."