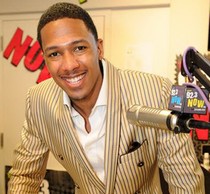 One of the many things Nick Cannon is doing with his clothes on these days is launching a weekly radio countdown show.

"I figured I'd fill those last few extra hours in the corner of my life," jokes the WXRK (92.3 FM) morning host, whose syndicated "Cannon's Countdown" starts this weekend, according to a story by David Hinckley at nydailynews.com.

WXRK listeners will hear the pop version of "Cannon's Countdown." He's also doing a three-hour urban version, which doesn't have a local outlet yet. On the pop show, he will count down the top 30 songs. On the urban show, the top 20.

In both cases, he says, the content will reflect what listeners hear mornings on "Rollin' With Nick Cannon."

"We'll feature the music," he says. "But we'll get into quite a few interviews and talk about what's going on in entertainment. When a heavy hitter is around, like Jay-Z, we'll be talking to them."

Cannon has an entry into that A-list world because he's an active performer himself. He's been featured in several movies and hosts "America's Got Talent." He'll have a Showtime standup comedy special next month - in which he promises to offer more thoughts on Eminem - and there's also his marriage to Mariah Carey, who's expecting twins in the next couple of weeks.