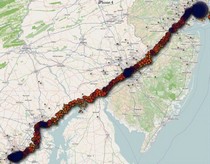 Security researchers have discovered that the latest operating system powering the iPhone and iPad keeps a log of everywhere you go, recording both the location and time you were there.

According to a story at foxnews.com, the feature has been around since June 2010, meaning some iPhones have nearly a year of location history recorded in a single file -- every step, trip to the park, family vacation and more. And that, said security experts Alasdair Allan and Pete Warden, who uncovered the file, poses serious problems.

"It became clear that there was a scary amount of detail on our movements [in the iPhone]," they noted in a post on their website.

"By passively logging your location without your permission, Apple has made it possible for anyone from a jealous spouse to a private investigator to get a detailed picture of your movements."

Apple did not respond to calls or e-mails for comment from FoxNews.com.

The two British programmers accidentally discovered the iPhone feature -- some would call it a bug -- when they were making software based on user locations. And digital privacy consultant Frank M. Ahearn says he has seen the problems caused by such lack of privacy first-hand.