Report: VH1 Cultivates Its Female Side

After watching its audience erode in recent years, cable channel VH1, known for its celebrity-driven reality shows, is giving itself a makeover. 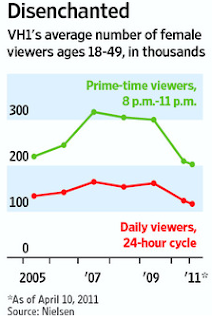 Seeking to reinvigorate the 26-year-old channel, executives are targeting an audience that was once an afterthought for network strategists, but which advertisers now are clamoring to reach: women 25 to 35, according to a story by Lauren A. E. Schukey at wsj.com.

To attract those viewers, VH1 is introducing a slate of new programming that kicked off Sunday night with a trio of reality shows, including "Mob Wives," which follows several women who were born into, or married into, reputed Mafia families.

"We saw ratings deteriorate, and we were hearing from our audiences that there was a fatigue level with some of our shows," said Tom Calderone, president of VH1, part of Viacom Inc. "So we decided it was time to figure out what our next voice was going to be."

The channel's new voice is about to grow louder—and more female. In May, VH1 plans to introduce a morning talk show about pop culture called "Big Morning Buzz Live," hosted by TV personality Carrie Keagan. Ms. Keagan, 30, is in the same age group as the young professional women VH1 hopes to win over.

Later in the month, the channel plans to launch "Single Ladies," a comedy series from the production company of singer and actress Queen Latifah.