No Bob Woodward, Google Did Not Kill Newspapers 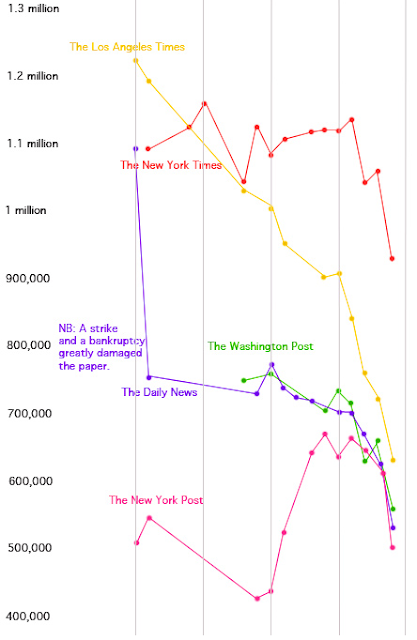 From Derek Thompson, Associate Editor at The Atlantic

The tombstone of Google's former CEO Eric Schmidt will read "I killed newspapers," Bob Woodward said [last weel]. With all due respect to the celebrated reporter and author, this is a misguided way of looking at Google, or newspapers, for at least three reasons.

1. The Decline is Older Than GoogleWoodward has been around newspapers for more than 40 years, so he knows as well as anybody that the decline in newspaper circulation is older than the search engine.* Recently the Washington Post, where Woodward is still assistant managing editor, wrote, "average daily circulation of all U.S. newspapers has been in decline since 1987 as papers have faced mounting competition for reader attention and advertising."

In 1987, Google founder and CEO Larry Page was 15 years old and Google was 11 years away from being a company.

Newspapers have been under assault since the invention of radio, the invention of Time magazine, the invention of television, the invention of cable TV, and so on. Today, 140 years after the Washington Post started publishing, the newspaper industry is a $30 billion national business. That might be decline, but it's not death. Technology is disruptive and successful companies adapt rather than draft the tombstones of their would-be killers.