Southern California is choosing an alternative route for its morning commute, according to a story by Steve Carney for the latimes.com. 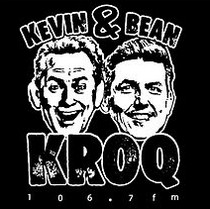 KROQ-FM (106.7), with its comedic team of Kevin Ryder and Gene "Bean" Baxter, unseated talk radio station KFI-AM (640) as the most popular outlet during the morning drive period — weekdays from 6 to 10 a.m. — according to figures released Monday by the Arbitron ratings service.

KROQ's audience share rose from 5.4% in February to 6.2% in March, helping it best KFI in the all-important time slot. For years, KFI has held a virtual stranglehold on the a.m. audience by airing local host Bill Handel with the first hour of Rush Limbaugh's program during the morning hours.

Even though it improved its audience share from 5.4% to 5.9% from February to March, KFI fell to second place in morning drive time.

In terms of overall listeners, pop music station KIIS-FM (102.7) topped all Los Angeles-Orange County stations in March, claiming 5.1% of the audience ages 6 and older. Adult-contemporary station KOST-FM (103.5) placed second at 4.6%, based on the survey of listeners from March 3-30.

KFI finished third overall with 4.3% of the audience, improving from its fourth-place showing in February, when it took a 4.1% share.

Andy Ludlum, director of news programming for KNX and sister station KFWB-AM (980), attributed the station's gains to the earthquake and resulting tsunami and nuclear crisis in Japan, as well as the death of Hollywood icon Elizabeth Taylor and a rainy L.A. Marathon.

March PPMs rolled out Monday for a dozen markets, Click here to see.
Posted 7:05:00 AM