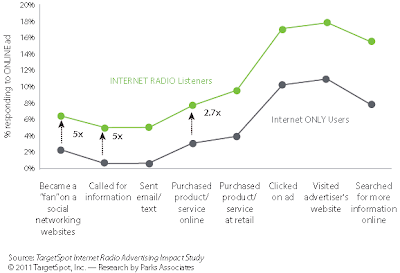 Internet Radio Use Increases Online Ad Responses, Across the Board: Online and Offline

According to a story by Helen Leggatt at bizradio.com, they found that almost 4 out of 10 people (39%) in the US listen to Internet radio on a regular basis, with 80% of those listeners tuning-in for about one to three hours per day.

Those listeners are not station-loyal, according to TargetSpot's research, with the majority (73%) changing stations throughout the day.

TargetSpot also revealed what they dub a "Super Demographic' among Internet radio users. This demographic, they say, is "tuned-in, highly engaged and influential" and should not be overlooked when developing online marketing campaigns.