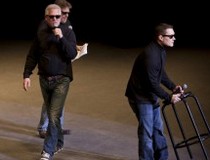 Plans To Take On Jon Stewart And Stephen Colbert

Talk show host Glenn Beck announced Saturday he has finally sold his Connecticut home and will be moving out of New York City in the near future, according to a story by Joe Brookes at wireupdate.com.

After a year of teasing on both his radio and television programs, Beck made the announcement during a live broadcast on GlennBeck.com from Albany, New York. Beck said leaving New York would be part of his post-Fox News life.

Other notes from the broadcast:
Read More.

THE DAILY CALLER: Conservatives hit Beck for taking content without Attribution
Posted 9:12:00 AM