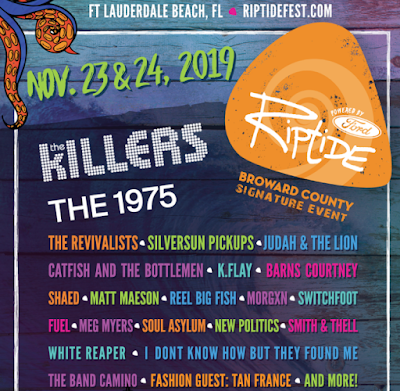 Entercom has  revealed the lineup for its 4th annual “Riptide Music Festival powered by Ford,” a RADIO.COM event.

The two-day festival will feature over 20 musical performers including The Killers, The 1975, The Revivalists, Silversun Pickups and Judah & The Lion, among others. “Riptide Music Festival powered by Ford” will be hosted by WSFS 104.3 The Shark, South Florida’s only alternative station, on November 23 and 24 on Fort Lauderdale Beach at 1100 Seabreeze Boulevard in Fort Lauderdale, FL.

“As a South Florida native, I could not be more proud of this year’s ‘Riptide Music Festival powered by Ford’ lineup,” said Keriann Worley, Senior Vice President and Market Manager, Entercom South Florida. “Broward County and Entercom have joined forces to bring the world to Fort Lauderdale Beach for a one-of-a-kind event at a one-of-a-kind location. This year is even more special thanks to its designation as the 2019 Broward County Signature Event.”

As the 2019 Broward County Signature Event, “Riptide Music Festival” will also highlight fashion in Broward County with a runway fashion show hosted by Tan France, fashion expert from Netflix’s “Queer Eye for the Straight Guy.” The event will also feature an enhanced art exhibition celebration and a robust array of culinary food demos by celebrity chefs on the Maximus mobile kitchen, as seen on Gordon Ramsey’s television show “Hell on Wheels.”