Apollo Global Management LLC has approached broadcasting company Tegna Inc. about a deal as the private-equity firm looks to bulk up its ownership of television stations, according to The Wall Street Journal citing people familiar with the matter.

Apollo first contacted Tegna about a potential transaction at the beginning of the year, some of the people said. It sent a letter to the board in February, expressing interest in buying the company at a premium, and it has remained in regular contact despite so far being rebuffed, the people said. Apollo would also consider other options, such as merging its stations with Tegna or selling them to the company.

Tegna has a market value of roughly $3 billion.  Tegna’s shares are up about 38% so far this year, including closing up roughly 10% Friday after The Wall Street Journal reported on the approach.

Apollo envisions combining Tegna’s assets with those of Cox Media Group, in which it agreed to acquire a majority stake in February, the people familiar with the matter said. Apollo also struck a deal earlier this year to acquire 20 stations owned by closely held Northwest Broadcasting Inc., which would be merged into the larger TV-station group. Together, the deals would quickly make Apollo one of the nation’s biggest owners of local TV stations.

Apollo expects both transactions to close in September, according to people familiar with the matter.

By getting bigger, broadcasters can gain leverage when negotiating with content owners, with cable and satellite companies for distribution and with advertisers. Station owners are also responding to the consolidation happening in the entertainment and distribution businesses. In March, Walt Disney Co. closed a deal to acquire the majority of 21st Century Fox Inc.’s entertainment assets and last year AT&T Inc. acquired Time Warner Inc.

Apollo’s approach comes in the wake of a wave of consolidation in the local-TV market. Last year, Nexstar Media Group Inc. agreed to acquire Tribune Media Co. for $4.1 billion. To secure regulatory approval, Nexstar agreed in March to sell 19 stations to Tegna and E.W. Scripps Co. for a total of $1.32 billion and struck another deal in April to sell two Indianapolis stations to a smaller operator for $42.5 million. Apollo had also been a bidder for those stations, the Journal reported. 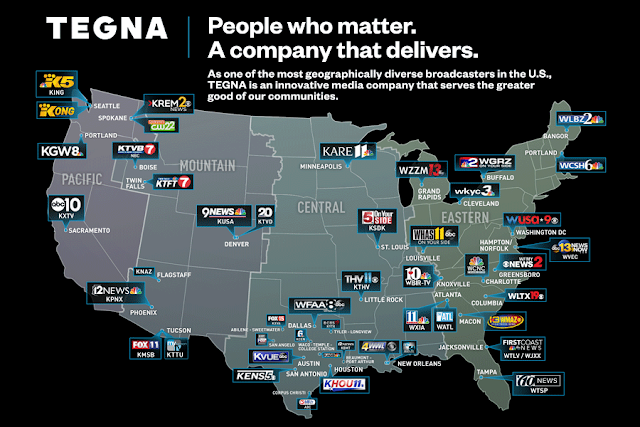 With 51 TV stations, Tegna reaches just over 35% of U.S. TV households. That doesn’t include the 11 stations it has agreed to acquire from Nexstar. If Apollo buys Tegna and closes all of its other the deals, it will own 85 stations, or nearly 100 including the Nexstar stations that Tegna has agreed to buy.
Posted 2:01:00 AM