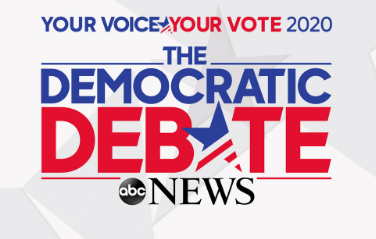 ABC News is partnering with Univision on the third debate sanctioned by the Democratic National Committee. The debate will take place at Texas Southern University’s Health & PE Center in Houston.

In order to qualify for the September debate, candidates must cross polling and grassroots funding thresholds.Candidates must receive 2% or more support in at least four national polls, or polls conducted in the early-voting states of Iowa, New Hampshire, South Carolina and/or Nevada. These polls must be sponsored by an approved organization and publicly released between June 28 and August 28. Any candidates’ four qualifying polls must be conducted by different organizations or - if by the same organization - must be in different geographical areas. Candidates must have received donations from at least 130,000 unique donors over the course of the election cycle, with a minimum of 400 unique donors per state in at least 20 states. Qualifying donations must be received by 11:59 p.m. on August 28 for the September debate.

If more than 10 candidates qualify under the rules, the debate will take place over two nights. For the two-night scenario ABC News in accordance with the DNC will hold a selection event on August 29 to randomly assign the candidates to each night. The format of the debate will be one minute and 15 seconds for direct responses to questions and 45 seconds for rebuttals.
Posted 2:12:00 AM