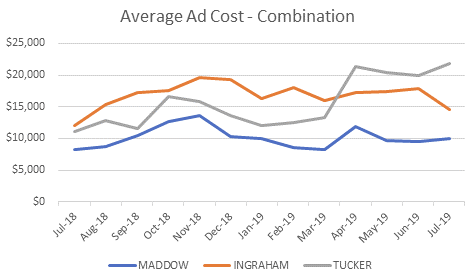 Despite multiple boycotts initiated against Tucker Carlson tonight and its host since 2018, the combined average cost for a 30-second unit on Fox News’ 8 p.m. show has managed to nearly double year-over-year, according to TV Newser citing a recent study performed by the New York-based media cost research & analysis company, SQAD.

Says SQAD, bottom line, it appears that the boycotts are not making a significant financial impact on the network (because committed ad dollars from boycotting brands are just being rerouted to other shows on the network.) And, those advertisers that stick with the host, pay a premium to reach the newly concentrated viewership.
Posted 10:10:00 AM