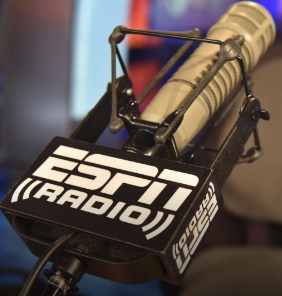 ESPN Radio saw another successful month of growth in July overall and across studio shows, markets and time spent listening with men 25-54 AQH. ESPN Radio as a whole grew its time spent listening by 8 percent compared to July 2018 and was up 2 percent on terrestrial radio in PPM markets over the same time frame, according to Nielsen.

The Will Cain Show’s total audience across all platforms for M25-54 enjoyed a 13 percent increase over July 2018. The show also saw a 33 percent increase year over year in audience for both terrestrial radio in PPM markets and its ESPNEWS simulcast. Cain was also recently added to the daily lineup at ESPN Radio’s local station in San Francisco, further expanding the show’s reach.

The M25-54 total audience across all platforms for The Stephen A Smith Show, with the addition of its television simulcast which began August 13, 2018, grew 45 percent in July from 2018. The show’s ESPNEWS simulcast specifically, grew 2 percent in July from June 2019. The show’s audience on terrestrial radio in PPM markets also grew 4 percent from the previous month with the M25-54 demographic. The Stephen A. Smith Show saw year-over-year audience increases for M25-54 at local stations in Los Angeles, Dallas and Hartford and is also further expanding its local reach, recently being added to the daily lineup at ESPN Radio stations in D.C., Miami and Detroit (beginning September 9).

The Dan Le Batard Show with Stugotz saw multiple successes in July with its ESPNEWSsimulcast for M25-54. From 2018, viewership for the show in July was up 4 percent. The show also grew its viewership by 6 percent from June 2019. Its terrestrial radio audience in PPM markets also grew 13 percent from June. Locally, the show saw year-over-year increases on stations in Norfolk and Hartford for M25-54.