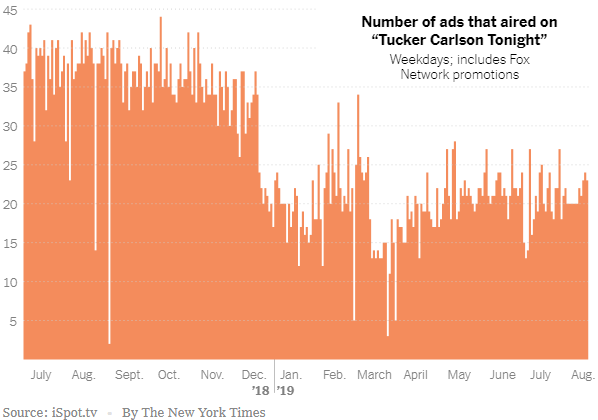 The Monday episode of “Tucker Carlson Tonight,” the host’s first since he left the airwaves for what Fox News said was a planned vacation two days after making the remarks on white supremacy, had fewer commercials than usual, reports The NYTimes.

There were spots for turmeric drink mixes, ear wash systems and cup-holder mounts for smartphones, as well as ads for Dyson, Raymour & Flanigan and USAA, but none for products from SoFi, Calm or SteinMart. Those companies advertised on the program earlier this summer but said in statements in recent days that their commercials would not appear during Mr. Carlson’s nightly hour.

A Monday night episode from one year ago, the broadcast of “Tucker Carlson Tonight” on Aug. 20, 2018, had 16 minutes of ads, with 38 commercials that aired across the nation, according to iSpot.tv, the television ads measurement company. The Monday night episode this week, by contrast, had 13.5 minutes of commercials, with 23 nationally aired spots. Eight of the 23 were promotions for other Fox properties.

Carlson still attracts a large audience. He drew 3.1 million viewers on Monday night, the second-largest audience in all of cable that night. That number put him close behind his Fox News colleague Sean Hannity, according to Nielsen. But that has not been enough for the show to hang on to many advertisers.

On his Aug. 6 episode, Carlson said that white supremacy was “actually not a real problem in America” and likened it to a “hoax” and a “conspiracy theory used to divide the country and keep a hold on power.”
Posted 2:20:00 AM