Don McLean: "I Am Not A Villain' 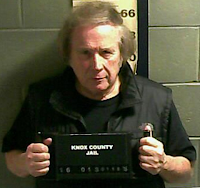 Three days after he was arrested on a domestic violence charge, "American Pie" singer Don McLean is pleading with his fans for understanding.

"This last year and especially now have been hard emotional times for my wife, my children and me. What is occurring is the very painful breakdown of an almost 30 year relationship," he said Thursday in a statement on his website and on Twitter.

"Our hearts are broken and we must carry on," added the singer-songwriter, 70. "There are no winners or losers but I am not a villain."

CNN reports police in Camden, Maine, where McLean lives, arrested him early Monday on a misdemeanor charge of domestic violence assault. He was booked into the Knox County Jail and posted $10,000 bail a few hours later, according to Knox County Cpl. Bradley Woll.

McLean's wife was granted a temporary order of protection from the "American Pie" singer after she cited a pattern of abuse going back three decades.

Patrisha McLean wrote that in the early years of their marriage, McLean's rage was "unfathomably deep and scary."

She said McLean's abuse often left her bruised, and that she feared for her life when she called 911 from the bathroom of their Camden home this week. "Don terrorized me for four hours, until the 911 call that I think might have saved my life," she wrote.
Posted 2:25:00 AM