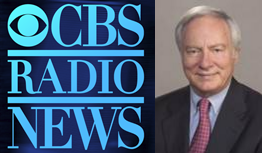 CBS Radio News’ weekday legal segment "Looking At The Law", which launched four decades ago, this week marks its 10,000th broadcast delivered to listeners around the country and on the Armed Forces Radio Network around the world.

The segments, which launched on April 1, 1976, feature attorney and Harvard Medical School professor Neil Chayet’s unique insights into legal cases and judicial situations that impact listeners every day. Looking At The Law can be heard in New York, Boston, Chicago and many more major city. Since the launch, Chayet has wrapped up his lively and informative reports with a twist or a pun, and the signature tag line, “This is Neil Chayet, Looking at the Law.”

“Neil thought he would run out of material by now, but with millions of lawsuits brought every year, along with an apparently endless supply of puns, the future is secure,” said Harvey Nagler, CBS News Vice President, Radio. “Most listeners have gotten a chuckle – or a groan – from Neil’s last lines and continually marvel at the strange and sometimes wacky cases that find their way into the courtroom.”

Looking At the Law was an outgrowth of Chayet’s early work at the Boston University Law-Medicine Institute where he then worked with the late Sen. Ted Kennedy and others drafting the first Community Mental Health law in the country. He was also the lawyer for the Psychiatric Task Force for the Boston Strangler investigation and the lead investigator in a federal study of single-car fatal auto accidents that helped lead to many now-standard safety features. He’s a graduate of Tufts University and the Harvard Law School. That deep legal background made Chayet a frequent guest on CBS Radio and television stations, which eventually led to the creation of Looking At The Law.

Four decades and 10,000 broadcasts later, Chayet is still Looking At The Law every day.

Editions of Chayet’s LOOKING AT THE LAW can be also heard at Play.it.
Posted 2:03:00 AM