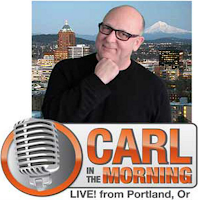 Portland progressive talk-radio host Carl Wolfson has felt the Bern. And he says the personal attacks of Sen. Bernie Sanders' supporters are causing him to cancel his show.

Wolfson announced this morning on Facebook he's ending his morning politics talk show on KXRY 91.1 FM / 107.1 FM XRAY.FM, citing the toll on his health and finances, the declining state of political discourse and the "vitriol of so many Bernie supporters" in the Democratic presidential primary race against Hillary Clinton.

"I have too little faith in politics to continue," he told wweek.com.

"Carl in the Morning" debuted in March 2014 on KXRY 91.1 FM, better known as XRAY. It marked a return to the airwaves after Wolfson's left-wing drive-time talk show was dumped by Clear Channel, which turned KPOJ 620 AM into a sports talk station in 2008.

Here's the full text of today's farewell note from Wolfson.


OK. I’m done. The vitriol of so many Bernie supporters and the threat they pose to Democratic unity is a bridge too far. Politics itself has gotten so nasty, so extreme and so personal that I have even been drawn into uncivil discourse in the past few days. If progressives that I have spoken for during the past nine years on radio (and during 40 years of activism) have lowered themselves to label Hillary a “fascist” or the “spawn of Satan” and worse, I have too little faith in politics to continue.

This is not a rash decision. I have been considering it for months. I am proud of what we have accomplished on the air TOGETHER since 2007 (and 2,280 shows to be exact!) I am proud that CITM was civil, informative and fun. At a future date, after a healthy space of time, I will reflect on the whole experience: the thousands of incredible guests, callers, causes and moments that filed our time together. I am especially grateful to those who helped me relaunch CITM after Clear Channel switched KPOJ’s format in 2008, and who have kept us going on XRAY, realizing that, in a time of media consolidation, local voices are an essential fortification of democracy.

I will probably stay on for a couple more weeks (no longer) so XRAY can get the slot filled. Have no idea what I will do, but I’m sure I want a job as far away from politics as possible. It’s been the core passion of my life ever since 1963, when I was seven and watched the first Kennedy-Nixon debate! The only thing Nixon and I had in common was we weren’t wearing makeup.

But politics sucks. And that people like Thom Hartmann and other progressives have stooped to the levels and tactics of Lars and Fox, cuts me to the core. During the SOTU, President Obama called (again) for a political system worthy of a great people. On that score, we are failing. All of us are failing. Ninety-hour work weeks and the stress of producing two-hours of live radio on weekdays with a bare-bones staff has taken a terrible toll on my health. And after the Clear Channel boot, I’ve had to sink too much of my savings into the effort.

I appreciate so much the sponsors and individual donors that kept us alive; at the same time, I wish more had given. In the end, though, my joy and gratitude far outweigh the regrets. Politics and activism will go on, but without me. Right now — I’m relieved! At some point, we should all have a big party. I have 200 CITM T-shirts in the garage to give away!