Columbus Radio: Ted Williams Is Back With A Morning Show 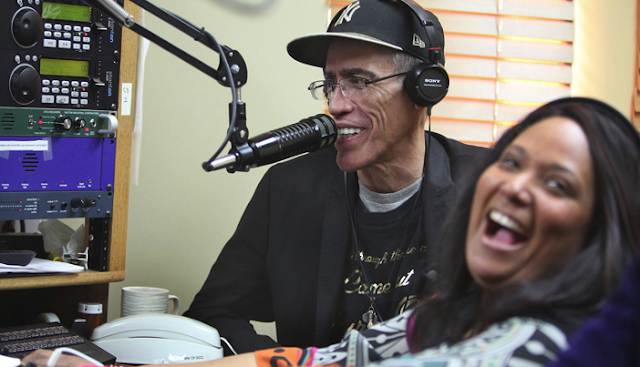 During a high-energy “praise break” while on the air, Ted Williams clapped his hands and nodded his head to upbeat gospel music, barely able to contain himself to a chair.

The jokes and laughter that followed were broadcast live as part of a new weekday program starring Williams on WVKO 1580 AM The Praise, the same Columbus station where he began a radio career in the 1980s before addictions to drugs and alcohol took the popular local personality from the studio to the streets.

The Columbus Dispatch reports last week marked his first on the job, and the 58-year-old former disc jockey’s first steady employment, in radio or otherwise, since 1993.

The host was back in the zone.

“See how God works?” a sober Williams said on Thursday morning, speaking into a microphone as calls and Facebook messages trickled in from folks as far away as Australia and England.

The week also marks five years since Williams was introduced to millions around the world through an online Dispatch video showcasing the panhandler’s unexpected “golden voice.”

Williams’ brush with overnight fame, though, wasn’t a Cinderella story. The depths and damage of his longtime demons played out publicly — from Dr. Phil appearances and family altercations that made the tabloids to a tense reunion with his long-estranged mother on national television.

He’s now living on the West Side of Columbus with his daughter, Tangela Pullien, and his longtime girlfriend, Kathleen Chambers — who, like Williams, has battled drug addition and also attended a rehab program paid for by Dr. Phil McGraw.

Williams said he lost out on millions because of inexperience and dishonest managers who didn’t have his best interests at heart as opportunities to use his honeyed baritone arose. He declined to elaborate.

Compensation for the WVKO show — a mix of inspirational talk and contemporary gospel music that airs weekdays from 6 to 10 a.m. — comes from commercial sponsorships sought by Anthony, not via WVKO.

Williams, meanwhile, has other sources of income: A longstanding partnership with Kraft Foods (purveyors of his signature “You know you love it” tagline) begat a recent spot for its Star Wars-themed macaroni.

And Williams was tapped by Pepsi to supply voice-overs in a commercial that aired during the popular Fox drama Empire.
Posted 3:03:00 AM