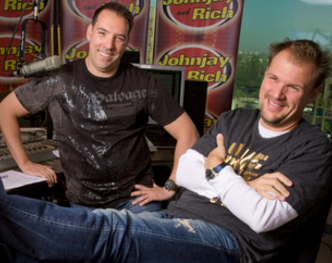 Actress and singer Hilary Duff joined The Johnjay & Rich Show today, April 30, to talk about her new sitcom "Younger" on TV Land, which was just renewed for a second season, and the recent release of her single "Sparks." Duff also talked about a couple dates she's been on since joining Tinder, revealing that some of her fans were angry about a group bowling date she went on.

"I don't know why people are so angered by what I'm doing on Tinder, or how I decide to spend my time with my dates..." shared Duff. "...This whole thing started as a joke, and then my girlfriend was like â€˜you can't go on Tinder.' And I was like â€˜you bet your sweet ass I can. Why not? I don't care what people think.'"

When asked if she was open to a relationship or something more serious, Duff said, "I don't know if it's going to happen on Tinder...I wouldn't turn it down if I was actually, genuinely into a guy and thought he was good for me...It would be the story of the year, that I fell in love on Tinder."