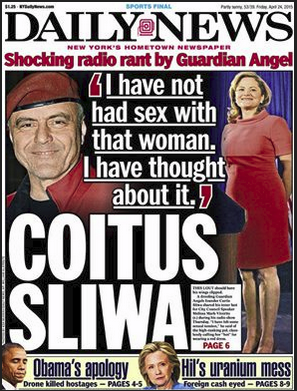 77 WABC radio personality Curtis Sliwa has been suspended from his regular commentating gig on New York 1 because he can’t stop telling the public about how badly he wants to have sex with New York City Council Speaker Melissa Mark-Viverito.

He recently described the speaker as “extraordinarily hot.”

During a panel discussion on New York 1, Sliwa addressed a not-present Mark-Viverito in the “character” of a Latino man telling her, “I’m your papi, right?” The next day, on Curtis and Kuby, the midday show on WABC, he went on at length about the imaginary “sexual tension” he believes exists between himself and Mark-Viverito.

The NY Daily News reports that Sliwa has been suspended “indefinitely” from appearing on NY1, with the company telling the paper, “In light of recent remarks made by Curtis Sliwa, we have removed him from the weekly Inside City Hall segment for the foreseeable future. While he has appeared on the network, he is not an employee of NY1.”

On the “Curtis and Kuby” Facebook page he also released a statement that says, in part, “all’s fair in love and politics” and claiming that he was using “sexually charged language” to encourage men to seek treatment for impotence, a condition he has suffered from due to gunshot wounds and prostate cancer.