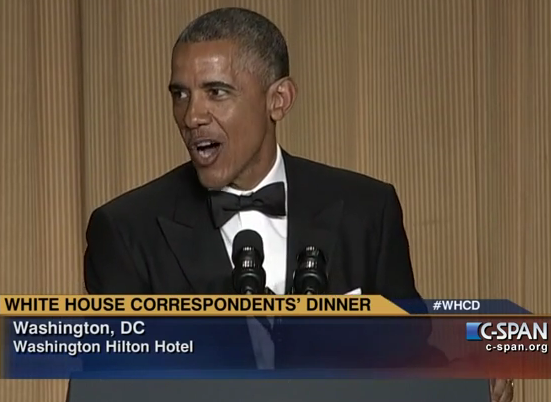 And in a nod to his takedown of Donald Trump in 2011, he noted Trump’s presence at this dinner. “And Donald Trump is here. Still.”

After welcoming the cast of ABC’s “Blackish” comedy, he warned: “(But) being ‘Blackish’ only makes you popular for so long.”

One of his biggest laughs came when he noted that people ask him, “Mr. Obama, do you have a bucket list? Well, I have something that rhymes with bucket list.”

His quip about Hillary Clinton came when he noted that some Americans were going through tough times. “I have one friend who was making millions of dollars a year and now she is living out of a van in Iowa.”

He also added a twist to his delivery, bringing on “Luther, the anger translator,” aka Keegan-Michael Key, to shed light on his true feelings about media coverage of the job he is doing.

One of his biggest laughs came when he talked about his close relationship with Vice President Joseph Biden. “We’ve gotten so close that in some places in Indiana they won’t serve us pizza anymore.”