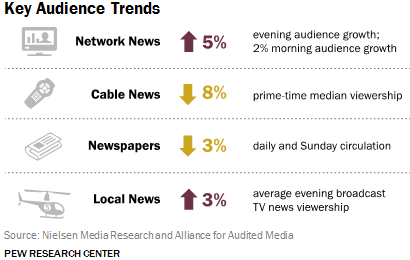 Pew Research Center calls it a mobile majority. At the start of 2015, 39 of the top 50 digital news websites have more traffic to their sites and associated applications coming from mobile devices than from desktop computers, according to an analysis of comScore data.

At the same time, though, desktop visitors to these sites tend to spend more time per visit than do mobile visitors. For half of these top 50 news sites – which include legacy print, cable, network, international and public broadcasting outlets as well as digital-only entities – visitors from desktops stay longer than those coming through mobile. The reverse is true for only 10 of the sites, while for 15 sites the time spent is roughly equal.

In tandem with the growth of mobile has been the further rise of the social Web, where the flow of information embodies a whole new dynamic. Some of our 2014 research revealed that nearly half of Web-using adults report getting news about politics and government in the past week on Facebook alone, a platform where influence is driven to a strong degree by friends and algorithms. 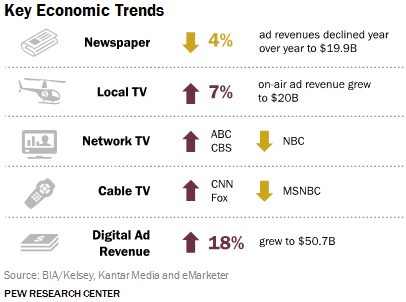 Americans’ changing news habits have a tremendous impact on how and to what extent our country functions within an informed society. So too does the state of the organizations producing the news and making it available to citizens day in and day out. Pew Research Center’s State of the News Media report focuses primarily on the latter, tracking the expanding and diversifying news industry over time and across a variety of indicators.