WLS 94.7 FM listeners will be hearing a special liner this weekend saluting Dick Biondi's 55-years on the station and WLS-AM.

Biondi is on-air nightly 11pm to 2am.

Richard O. "Dick" Biondi began his broadcasting career in New York at station WCBA. He moved to Chicago in 1960 where he worked at WLS. During this time, he wrote and recorded the novelty song, "On Top of a Pizza," which sold over 11,000 copies.

In the early 1960s, Biondi was the nation's #1 disc jockey, averaging a 60 share of the national audience. You listened to Biondi or else.

In early 1963, Biondi is credited as the first U.S. disc jockey to play the Beatles, on Chicago's WLS 890 AM in February 1963, with the song "Please Please Me". That same year, Biondi left Chicago for KRLA/Los Angeles. The following year, he joined the Mutual Broadcasting System for a syndicated program heard on over 125 stations. During this time, he launched the Dick Biondi Road Show, bringing young acts to local schools throughout Southern California. 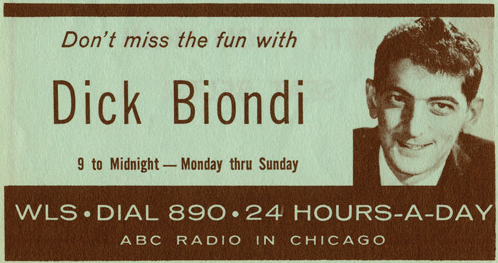 Biondi is an inductee of the National Radio Hall of Fame.
Posted 3:00:00 AM