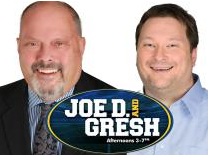 Joe D and Gresh will feature D’Ambrosio and Gresh, who are described as a New York sports fan and a Boston sports fan respectively. They will talk about national, college and local sports topics.

Operations Manager Steve Salhany says, “We are excited to begin this next chapter of afternoon drive on WTIC. Sports has always been a huge part of WTIC Radio and now we are dedicating time every afternoon for sports fans, regardless of where their loyalties lie, to come together and talk about their teams”.

On co-hosting the new show at WTIC Joe D says, “This is something I have wanted to do for a long time. I’ve known Andy and really am looking forward to working with him on a daily basis. I have no doubts that we will work hard to make this show a big success.”

Andy Gresh was most recently the midday host at WBZ 98.5 FM The Sports Hub in Boston.  He is a college football color analyst for Comcast Sportsnet/NBC and the American Sports Network as well as an analyst/co-host for Comcast Sportsnet New England. Andy spent 10 years as the pregame and postgame analyst on the New England Patriots Radio Network. He started his career in 1997 at WPRO-AM in Providence, RI. Andy played college football at the University of Rhode Island from 1992-1995 and was a 2 year letterman as an offensive lineman.

“I’m excited to be joining such a legendary radio station. I feel like I’ve hit the New England trifecta coming to WTIC-AM”, said Andy Gresh, “The vision for this show is so exciting. We can talk New York sports. We can talk Boston sports. We can talk college sports. It’s going to be a lot of fun”.

WTIC NewsTalk 1080 is owned and operated by CBS Radio. Find WTIC at 1080 on the AM dial, on the HD2 channel of co-owned WTIC FM and online at wtic.com.

The show will air opposite "The Rob Dibble Show" on ESPN radio, 97.9 FM in Hartford. Dibble, the former major league reliever from Southington, has been hosting the show, also 3 to 7 p.m., since March 2014.
Posted 3:33:00 AM