A year after the children of radio personality Casey Kasem had to seek court action to see their ailing father, a new law in Iowa aims to ensure that adult children can see their sick parents — granting them visitation rights unless the person's guardian goes to court to stop them.

Gov. Terry Branstad signed the bill into law Friday, according to The Des Moines Register. Under the measure, an adult with a legal guardian — someone who cannot manage their own affairs — would have the right to receive visits from family members and others they have previously expressed interest in seeing. The legal guardian could still control factors like the time and place of the visits.

Previously, Iowa law did not address how to handle such situations, said Sen. Rob Hogg, a Cedar Rapids Democrat who pushed for the bill.

The legislation was backed by Kasem's daughter, Kerri Kasem, who appeared on Iowa talk radio several times advocating for the bill. Kasem, a radio show host herself who lives in Los Angeles, is pushing for similar laws in several other states and said she believes Iowa is the first to enact such a bill. 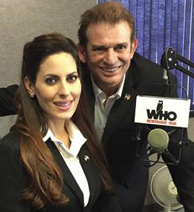 The legislation was driven by Kasem's daughter, Kerri Kasem, with an assist from WHO 1040 AM Des Moine's Simon Conway's show.

Conway told Jockline: 'It started in Atlanta, GA in February this year at the Talk Show Boot Camp conference. Kerri Kasem had just finished talking about what happened to her dad, Casey, at the end of his life and how she and her siblings had been kept away from him. She told the crowd that there was no judge anywhere in the United States that could order visitation as such a law did not exist. She said she was going to go State by State to get this done.

That's when Kerri and News Radio 1040 WHO Afternoon Drive host, Simon Conway, met. "After chatting for about five minutes, I made Kerri a promise," Conway said. "I told her I was going to find a way to get this law on the books in Iowa."
Posted 3:01:00 AM