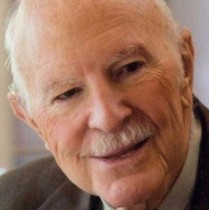 The man who helped calm the nervous butterflies in many a public speaker, inventor of the teleprompter Hubert Schlafly Jr., died in Connecticut April 20, according to a story by Michael Murray at
abcnews.com. He was 91.

Schlafly revolutionized the political and television landscape by allowing public speakers to face the camera and appear as though they were speaking from memory.

The original device created by Schlafly was made up of a motorized scroll of paper inside half a suitcase. The idea was inspired by a Broadway actor named Fred Barton in the 1940s. "I said it was a piece of cake," Schlafly recalled to the Advocate of Stamford in a 2008 story on his reaction to Barton's idea.

The device was first used on the CBS soap opera "The First Hundred Years" in 1950.

President Obama is hailed by supporters as a gifted orator but he has been lambasted by critics for his reliance on the teleprompter. In truth, every President since Dwight D. Eisenhower, except Richard Nixon, has used one for major speeches before Congress.