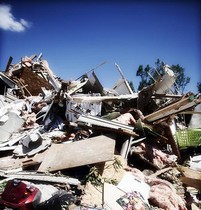 With hundreds dead, scores missing and the scale of the damage across the South still coming into focus, broadcasters are reluctant to interject politics into what one market manager calls radio’s “shining moment.”  But, reports Inside Radio, one lobbyist says the disaster’s impact could have a “potentially huge” impact on the debate.

After spending two nights in her Birmingham home’s basement with a battery-powered, hand-crank radio, Alabama Broadcasters Association president Sharon Tinsley sees little left to debate. “Cell phones aren’t working — I can’t call my family in north Alabama,” she says.  “If we had FM chips in cell phones, everyone would know what’s going on right now.”

BIZ REPORT: Smartphones are obsolete before contracts end
Posted 9:17:00 AM