Rasmussen: 58% Say Too Much of Royal Wedding 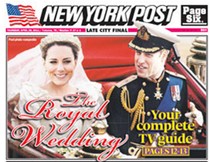 Friday, Prince William of England will marry Catherine Middleton in what some are calling “the wedding of the century.” But stateside a majority of Americans think the media is paying too much attention to the royal wedding.

A new Rasmussen Reports national telephone survey finds that 58% of American Adults say the media is giving too much attention to tomorrow's nuptials. Twenty-nine percent (29%) say the level of attention is about right. Just three percent (3%) think the media is not paying enough attention to the royal wedding. (To see survey question wording, click here.)