Arrest Made In Attempted Rape Of On-Air Radio Host 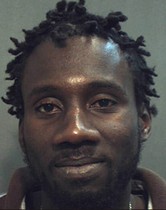 A man with a long criminal history broke into a Christian radio station in Pine Hills area of metro Orlando Monday morning and performed a sex act in front of the program host while threatening to rape her, according to a story posted at orlandosentinel.com.

The incident happened about 6 a.m. while listeners tuned in to the live religious programming.

The host told investigators she was on the air when the suspect entered the station without permission. She said the man exposed himself, performed a sex act and threatened to rape her.

A listener heard the threat and called 911.

The host remained calm and lured the man outside the building, the Sheriff's Office said. Then she got him to go back inside while she locked herself inside her car and waited for deputies.

Brighthouse Cable 13 news reports  the encounter happened at La Voix Evangelique D'Orlando, on the SCA channel of WMMO (98.9) on Pine Hills Road and Alhambra Drive.  The station broadcasts to Haiti from a church.  It requires a special transmitter to pick up the signal. The encounter inside the station was caught on surveillance video.
Posted 12:04:00 AM