Katie Tells Us What We Already Knew 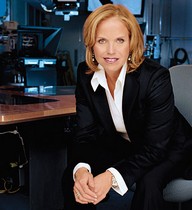 OFFICIAL: Katie Couric said Tuesday that her anchor stint on “CBS Evening News” will conclude this spring, ending a five-year run that brought some accolades, but saw its flagship newscast lose viewers.

“I have decided to step down,” she said as part of an interview with Time Warner Inc.’s People Magazine, confirming what people close to Ms. Couric have been saying was likely for weeks.

earlier story...
Katie Couric is contemplating a move to ABC as she prepares to end her five-year run as the “CBS Evening News” anchor, according to people with knowledge of the situation.

Couric, 54, is expected to announce this week that she will leave the show and hasn’t made a final decision about her future, said the people, who weren’t authorized to speak publicly, according to a story at bloomberg.com. Her contract with CBS ends June 4.

Both NBC and ABC are said to be discussing talk shows with Couric that would start in 2012, according to one executive with knowledge of the talks. ABC, part of Walt Disney Co. (DIS), has made a late run at Couric, said two of the people. The anchor and ABC News President Ben Sherwood met at least once for lunch to discuss the move, one person said.

Couric is being advised by Jeff Zucker, former chief executive officer of NBC Universal and previously her producer at NBC’s “Today” show.

Neither ABC nor NBC would offer her the evening anchor position, one of the people said. She would likely work on specials, including the upcoming presidential elections.