As for the reason to address the issue now, President Obama stated:


"…two weeks ago, when the Republican House had put forward a budget that will have huge consequences potentially to the country, and when I gave a speech about my budget and how I felt that we needed to invest in education and infrastructure and making sure that we had a strong safety net for our seniors even as we were closing the deficit, during that entire week the dominant news story wasn’t about these huge, monumental choices that we’re going to have to make as a nation. It was about my birth certificate. And that was true on most of the news outlets that were represented here."

But numbers provided by Pew’s Project for Excellence in Journalism — which tracks news coverage in its weekly index — contradicts Obama’s claim. (Hat Tip to Julie Moos at poynter.org).

For the week of April 11-17, the economy accounted for 39 percent of news coverage. 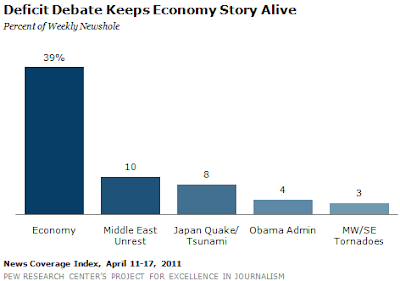