The New York Times has righted its ship after a near-death experience during the last recession. according to a story by Henry Blodget and Kamemlia Angelova at The Business Insider.

Thanks to sharp cost-cutting, the company has returned to profitability. And thanks to frantic debt restructuring, the NYT has also removed its creditors' foot from its throat and bought several more years to figure out a long-term plan.

But this happy escape has not alleviated the company's long-term problem:

Its core business, the print newspaper, is shrinking, and its digital business, however successful, cannot replace the lost revenue and profitability of the print business. 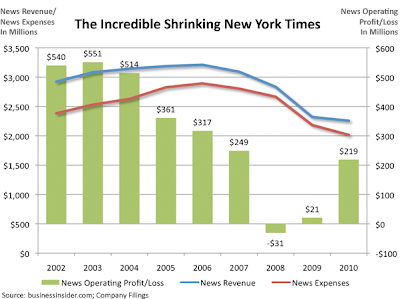 The chart above lays out the problem: After a century of growth, the New York Times's news business peaked earlier this decade with just over $3 billion in revenue and $500 million of operating profit. In the years since, however, the company's revenue and operating profit have begun to shrink.
Read More.


TomzTake: Now we know why the Times offers free digital access by merely subscribing to the Sunday edition. The Sunday paper is a bigger ROI.