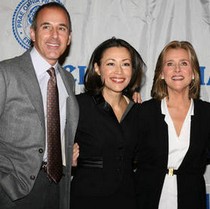 Meredith Vieira will exit NBC's Today show in June, nearly three months before the end of her contract, according to sources with direct knowledge of the situation.

According to a story by Marissa Guthrie at The Hollywood Reporter, Today newsreader Ann Curry will be promoted to co-host, and correspondent Natalie Morales will take Curry's place as newsreader.

An official announcement could come as early as next week.

Vieira took the seat next to co-host Matt Lauer in 2006, replacing Katie Couric. Since then, Today has extended its run as the top-rated morning news program to more than 800 weeks. The show is critically important to NBC News' bottom line, pulling in half a billion dollars in ad revenue last year for the weekday morning hours alone.

By elevating Curry and Morales, Today executives have the benefit of personalities who are familiar to viewers at a time of pronounced tumult in television news in general. Earlier this week, Couric announced that she will step down as anchor of CBS Evening News. And while she will mount a daytime program with former NBC News executive Jeff Zucker, Couric also is looking for a part-time perch at a news division, with ABC News among her suitors.