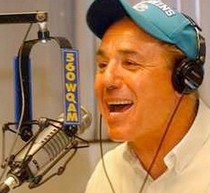 Former Dolphins tight end and popular South Florida sportscaster Jim Mandich died Tuesday night after a long battle with cancer, according to at story on CBS4 in Miami.

Mad Dog Mandich announced in March of 2010 that he was diagnosed with a tumor on his bile duct and won’t return to his talk show on WQAM. The tumor extended from the liver to the small intestine.

Mandich was drafted by the Dolphins in 1970 out of the University of Michigan. He was an All-American for the Wolverines and played eight seasons with the Dolphins. He’s a member of the College Football Hall of Fame and announced Dolphins games from 1992-2004 and from 2008-2009.