Talks to Scott Pelley about sexual assault, her rescue and recovery 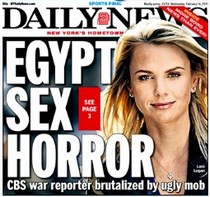 (CBS News)  Lara Logan feared she would die a "torturous death" during a sexual assault and beating she suffered at the hands of a violent mob in Egypt's Tahrir Square. In her first television interview since her ordeal two months ago, the CBS News chief foreign correspondent and "60 Minutes" reporter reveals what happened to her for the first time in an interview conducted by Scott Pelley.

On Feb. 11, Logan was on assignment for "60 Minutes" covering Egypt's mass celebration of its revolution. With her in Tahrir Square in Cairo were her producer, Max McClellan and cameraman Richard Butler. There was also an interpreter and a former member of Britain's elite military special services acting as a bodyguard.

She reported without incident for nearly an hour before her interpreter heard words in the Arabic-speaking crowd that gave him pause. He advised the team to leave, but before they could, a mob of several hundred men encircled Logan, who soon became separated from her team and bodyguard as the crowd swept her up.

Logan lost contact with her colleagues for approximately 25 minutes and endured a sexual assault and beating that she feared she would not survive. "There was no doubt in my mind that I was in the process of dying," she tells Pelley. "I thought not only am I going to die, but it's going to be just a torturous death that's going to go on forever..."