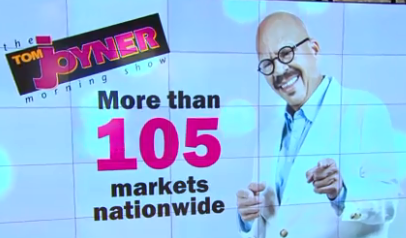 Radio personality Tom Joyner signed-off Friday after a legendary career. The 70-year-old has been the host of America's No. 1 syndicated urban morning show "The Tom Joyner Morning Show for the past 25-years.  The show ended with clearance in 105 markets nationwide and reached nearly eight million listeners.

"Our thing has always been to empower people. But to empower, we have to first entertain," Joyner told CBS News correspondent Jericka Duncan. "If I've got you laughing, I've got you listening."

Entertainment and empowerment have paid off. At his peak, Joyner said he was pulling in $14 million a year.

"If you had been offered more money, would you have stayed longer?" Duncan asked.

"Heck yeah. Shoot, I – my goal was to die on the radio. Have my funeral on the radio," Joyner said with a laugh.

Joyner was born and raised in Tuskegee, Alabama, one of many cities that helped shape the civil rights movement.

"I was a fat kid and they served great food at civil rights marches," Joyner said. "Oh my god, the chicken was good. So I'm out there protesting the fact our radio station in this all-black town didn't play any black music. And this guy who owned the radio station, which was inside a Ford dealership, came out and said, 'I don't need this. I'm trying to really sell some cars.' Tell you what, it's a sun up, sun down station, every Saturday, I'll let one of you play all the Aretha and The Temptations that you want."

He started at WRMA (an AM station in Montgomery, Alabama) 50-years ago. After breaking onto the airwaves there, he worked his magic at WLOK (an AM station in Memphis, Tennessee), KWK (an AM station in St. Louis, Missouri), and KKDA (an FM station in Dallas, Texas). Eventually, he moved to Chicago – the Windy City. He blew through the Windy City on radio stations WJPC (FM), WGCI (FM), WVON (AM) and WBMX (FM) and caused a whirlwind of excitement on urban radio. Never before had listeners experienced such energy, humor and vitality. 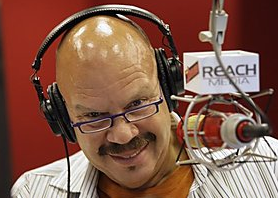 Opportunity came knocking in the mid 1980’s. Tom’s upbeat style and comedic antics put him in an awkward position. His contract was about to expire and it was decision time. He was offered the MORNING drive time position at KKDA (Dallas, Texas) by one company and the AFTERNOON Disc Jockey position at WGCI (Chicago, Illinois). Any normal human would have chosen one position or the other – Tom Joyner chose to do BOTH!

His plan was to fly thousands of miles every day by airplane each day between Dallas and Chicago. He spent so much time in the air that he received the name “The Fly Jock”. This commute and his rich on-air style gained him national publicity and high ratings.

In 1994, Tom Joyner took his show to a new level. He knew that if he wanted to reach a broader audience, more “Fly Jockeying” would not do the trick, so he convinced ABC Radio Networks that his show could work in syndication. ABC, impressed with his determination, credentials and following gave it a try. In 1994, The Tom Joyner Morning Show started with Tom Joyner at the helm. The show is beamed to radio stations across the country each weekday. Over 8 million ears tune into the show from their favorite local radio station.