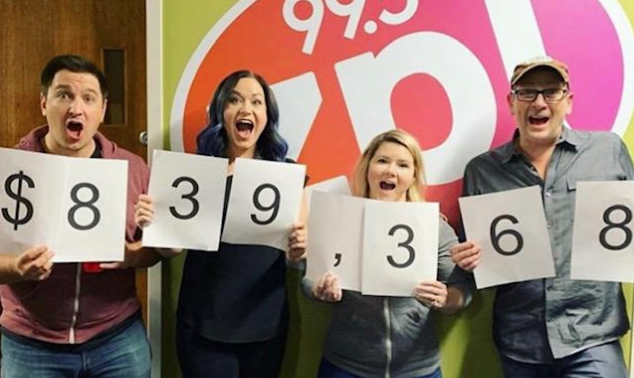 WZPL listeners called in to the live broadcast on December 5th and 6th and requested their favorite songs in exchange for a donation to Make-A-Wish Foundation, to grant life-changing wishes for kids in their community. Throughout the broadcast, WZPL shared inspiring wish stories from local Make-A-Wish kids and their families. Over the course of the last 23 years, 99.5 ZPL – Indy’s Number One Hit Music Station has helped raise more than $7.5 million for Make-A-Wish.

Chuck Fredrick, Vice President/Market Manager, Cumulus Indianapolis, said: “What a great way to head into the holiday season with TEAM WZPL helping so many kids’ wishes come true in our community!”

JR Ammons, WZPL Operations Manager, said: “A huge thank you to everyone who helped make the 23rd Annual Smiley Morning Show’s Make-A-Wish Request-a-thon another tremendous success. Thanks to the generosity of listeners and sponsors, we were able to raise $839,638, surpassing last year’s record total of $736,298. As a result, Make-A-Wish will be able to grant 83 wishes for kids right here in Central Indiana with life-threatening illnesses.”

Ammons added: “Congratulations to ZPL team members Dave, Nikki, Toni, Will, Cole, Mike, Liz, Sam, Chloe, Austin, Jerica, Miranda, Emily and Luke for their Red Bull-fueled ability to keep the party rolling for 36 straight hours and to our engineers, Jeanette, Dan, Mo and Katie, for making it run so smoothly. Together, we helped make more Hoosiers dreams come true than ever before.”